This game is now discontinued.

An entertaining game for 2-12 persons.

Each player takes a playing card. The numbered discs are tossed into the box base and stirred. Decide who is to be the ‘Bingo Caller’. The caller takes the numbered discs out of the box one by one calling out the numbers as they go and placing them on the checking chart. If a number called appears on your playing card cover it with one of the small cardboard squares provided. The first player to cover all of the numbers on their card is the winner and should shout ‘BINGO!’ in a loud, clear voice. A fun feature of British Bingo down the ages has been the novel calls employed with each number such as ‘Legs Eleven!’ or ‘Knock at the Door, Number Four!’

Are you looking for….. 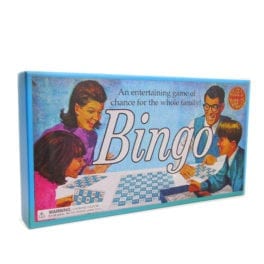