This is a very simple game for up to 8 players or for as many players as you can find straws. You can set it up anywhere and it will be an amusing diversion for family fun and games night.

Place a border around the pitch (books might be suitable) to stop the ball going outside the field of play. Then put the ball in the middle of the pitch and…blow.

If you get the ball in the opponent’s goal you have scored. First to five goals wins. You are not allowed to touhc the ball while it is in play – with hand, straw or anything else. If you do, your opponent(s) get a penalty.

The offending player (or team if playing more-a-side) has to put down their straw(s), the ball goes on the middle of the pitch and the penalty takers get the chance to score unopposed. The offending team are not allowed to pick up their straws and defend until the other team has restarted.

The winner(s) must raise the ‘Blow Football Cup’ above their heads and sing “We are the champions” as loud as possible. 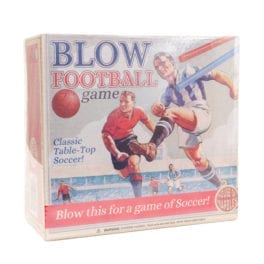