White always starts. Players change sides after each game. Each player takes it in turn to move one piece in each go. He may move whichever of his pieces he requires, planning his strategy, capturing as many of his opponent’s pieces as he can, always working to- wards the ultimate goal of “Checkmate”.

To capture an opposing piece, a player moves his attacking piece to the square occupied by the victim and removes the latter from the board. Any piece may take (capture) any op- posing men that it can, despite rank i.e. a Pawn may capture a Pawn or a Queen.

These eight pieces may only travel forward, but “take” on the diagonal like a Bishop. In the first move of a particular Pawn, the piece may be moved one or two spaces forward, There- after, it may only move one square forward each turn. If a Pawn succeeds in reaching the other side of the board, it may be exchanged for any piece, which, its owner chooses from his pieces already captured. If the Queen has been captured, it is best to exchange the Pawn for her and get back into play for reasons, which, will become obvious.

Each player has 12 pieces of the same colour.  The board is positioned so that a black square is at the bottom left of each player. The checkers are placed on the black squares in the three rows nearest each player.  The player with the black checkers moves first.

The checkers are confined to the black squares and must always move in a diagonal direction.  At the beginning of the game, checkers only move one square at a time either to the right or left, but always forward.  When a checker reaches the final row (the king row) it is crowned with another piece of the same colour (opponent takes one of the captured pieces and places it on top of the disk that has reached the king row) and becomes a king. A king can move both forward and backward in a diagonal direction.

Single, double, triple, quadruple jumps are possible at one time.

A player wins when he captures all of his opponents pieces or when the other player cannot make another move. 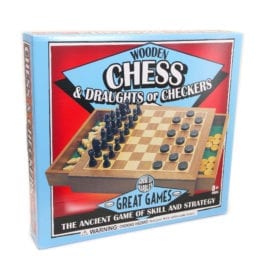