These instructions are for right handed people. For left handers just reverse left and right. To start the Diablo roll it along the floor on the string from right to left. After it has rolled approximately half a metre pick it up off the ground. It should be slowly spinning, and probably unsteady. Now keep pulling your right hand upwards then slowly lowering it; this action will cause the diablo to go faster in an anti-clockwise direction. The faster the diablo spins the more stable it will become.

As the diablo spins it will probably start to tilt towards or away from you. Correcting this problem is very easy; if it is leaning towards you (i.e. the near cup is down) push your right hand-stick forward. If it is leaning away (i.e. the near cup is up) pull the right hand-stick closer to you. When you’ve mastered that go on to the straightforward tricks.

Once you have mastered the art of throwing and catching, why not try to bounce the diablo off the string instead of catching it. Keep the string tight when it lands and throw it up again. Just be aware that the diablo can slow down while in the air so you may need to stop doing this trick and speed up the diablo.

You can throw a diablo very high so it is always best to do this trick in an open area so the diablo does not get caught. Also make sure that there is no-one too near you that might get hurt. If your throw is off by few degrees the diablo could land anywhere. While the diablo is in the air you have a good few seconds to do some tricks (use the hand-stick and string as a rope etc) The only limit is your own imagination and skilfulness.

This is the easiest of body moves where the diablo jumps a part of your body. Start by putting your foot on the string and toss the diablo from one side of your foot to the other. This can look impressive if repeated so that it goes over your foot then you slacken the string to go under your foot, then over again.

Al you need to do is get your diablo spinning fast and wrap the string around the axle with your dominant hands stick. The hold the string vertically making sure the string is pulled tight. The diablo will then climb the rope. 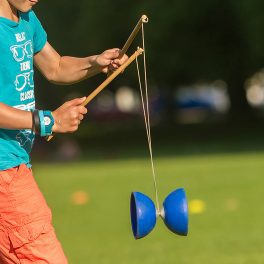