It is thought that domino games originated in China and came to Europe as early as the fourteenth century. There are many different games to be played with dominoes and you will now find them in most countries in the world. Here are the instructions for a few of the most popular games.

Most games use the standard 28 piece set which goes up from double blank to double 6. Double 9 and even double 12 sets are available. These sets make the same games longer and more complicated.

To shuffle dominoes at the beginning of a game, put them face down on the table and push them around until they are thoroughly mixed up.

At the beginning of each game players draw the right number of dominoes for that particular game from this pool of shuffled dominoes. If a game does not use all the dominoes at the start, the remaining pool is known as the boneyard from which dominoes are drawn later in the game.

In most domino games one joins dominoes together on the table when numbers match ie: if someone puts down a 6:4, the next player can join a domino to it only if they have a 6 or a 4 on the end of one of their dominoes, in which case they put it down 6 touching 6 or 4 touching 4. It is usual to join end to end in lines but doubles are often joined in the middle.

To start a game players each draw a domino from the pool. The player with the highest double usually starts. If no one draws a double, then the person whose domino has the highest number of pips (spots) starts. Play moves in a clockwise direction. Scoring is usually a matter of adding the number of pips on those dominoes that score, but this will be discussed with each game. Some games like the first game are won in different ways.

SIMPLE GAMES FOR THE BEGINNER

The dominoes are shuffled face downwards and players establish who is to start.

Players then each draw an equal number of dominoes and any odd ones left are discarded ie: 3 players using a double 6 set (28 piece) will have 9 each and one will be left out of play. It may not be seen.

Each player looks at their hand carefully so that only they and not their opponents know what they hold.

The aim in this game is to be the first player to get all their dominoes on the table. The first player places a domino face up on the table. If the same player can match a second domino then he/she is allowed to do so and can go on playing so long as they keep joining dominoes with matching numbers.

When a player is stuck and cannot match a domino, play passes to the next player who in his turn tries to get rid of as many dominoes as he can. The first person with all their dominoes out on the table is the winner. Play continues for second and third place, but if no one can go, then runners up are decided by the total value of the pips on the dominoes left in the hands of the players. The one with the lowest score winning the second or third place.

Divide the dominoes equally between the players discarding any leftovers unseen. Each player now puts their dominoes, still unseen in a row in front of them.

The first player takes the domino from the left of his row and places it face up in the centre of the table.

The second player takes the domino (on the left of his row) face up. If he can join it to the one in the centre he does so and play passes to the next player. If there is no match, he turns the domino over again and puts it on the right of his row. The next player then has their turn and so on until someone has played all their dominoes. He or she is the winner. If play is passing around and around without anyone able to play, call the game “stale-mate” and start again.

Shuffle the dominoes and decide who is to start. Up to 4 players draw 7 dominoes each. Five players draw 5 each. Remaining dominoes form a boneyard.

First player puts a double in the middle of the table or if he hasn’t got one, draws from the boneyard until he has. The second player must match one end of the double and join a domino. If he can’t, he must draw from the boneyard until he can. The third player must match the other end of the first domino. The second and third dominoes played must be matched with their doubles.

A game for two, three or four players.

Shuffle and draw the dominoes as usual. Two players take 7 each, 3 players take 6 each and 4 players take 5 each. The rest form the boneyard (some people play with more players each starting with 5 dominoes).

The player with the highest double starts. If it is a 5:5, the player scores 2 points. Players take turns to play one domino at a time joining a domino to a matching domino at an end of the line. Doubles are played across the line, but the ends of the double can only be joined once both sides have been joined. A player must play if he can. If he can’t he must draw dominoes from the boneyard until he can.

Each player draws 7 dominoes from the pool. The person with the highest double starts, although some people prefer to draw lots for the start and begin with any domino they choose.

Take turns to place dominoes in the line in the normal way, joining to matching ends. Double are placed across the line but can only be joined on the sides, not the ends. The aim is block your opponent’s so that they can not play.

When a player can’t go, play passes to the next player. If no one can play the game is completely blocked and that round is over. The players count the total value of the pips on the dominoes still held in their hands. The person with the lowest number is the winner of the round and adds to his score the value of each of his opponent’s hands.

If a player gets rid of all their dominoes the round ends and this players score is the total pip count of the dominoes remaining in the other players hands. Play as many rounds as you like until one players score passes 101. This player is the overall winner.

A variation is the DRAW game in which the rules are the same as BLOCK except that when players can’t go, they draw dominoes from the boneyard until they can, or until the boneyard is empty.

This is another variant of the block game. The rules are the same except that:

Each player starts with seven dominoes. The person with the 9:9 leads. If no one has it players draw from the boneyard until it appears. It is placed in the centre of the table. The next four dominoes must join the 9:9, one on each side and one on each end. There are now four ends on which to make lines. But, until all four are in place no other end can be joined. All other doubles are placed in line like other dominoes and can only be joined on the ends, not on the sides.

There are many other domino games and puzzles. These are some of the best.
We hope you enjoy playing them. 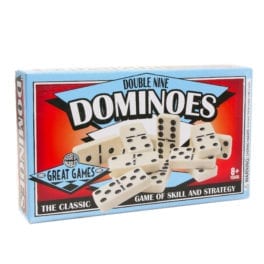 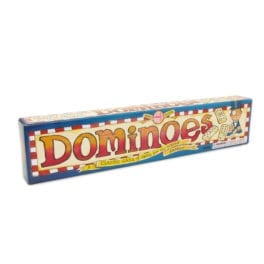 Wooden Dominoes in a Box 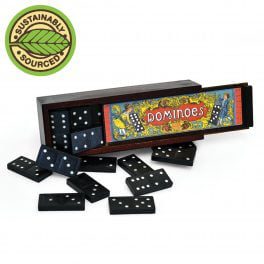