The box is placed in the centre of the table, the mitten flipper being placed approximately 20cm (8 inches) away with a wooden rod beneath, as shown in the image below. A playing piece is placed on the hand part of the mitten and this, on striking the wrist end of the mitten with the forefinger, is propelled towards the target.

After one or two practice shots it will be found easy to aim at any part of the target with reasonable accuracy, by adjusting the position of the mitten and strength of the stroke. A playing piece landing on the target but not entering a hole, is not removed during play as another playing piece may knock it into a scoring hole. Any playing piece which fails to reach the target may not be replayed in the same round.

FIRST METHOD OF PLAY for 2 to 4 players. Each player selects a mitten and all the playing pieces of the same colour. At the word “GO!” all commence shooting at the target. When all have finished, the scores are counted, the playing pieces scoring the value shown on the print beneath the filled holes. In addition, the first player to finish shooting is awarded a bonus 20 points. A player whose playing piece has landed in a hole over a black section has 25 points deducted from their total. Any playing piece that covers an opponent’s playing piece captures that playing piece and the value is added to the player’s score. The player scoring the highest total wins that round and the one taking the greatest number of the rounds is the winner of the game. Alternatively, the first player to reach an agreed total is the winner.

SECOND METHOD OF PLAY for any number of players. Each player uses all, or an agreed number of the playing piece and players follow each other in an agreed-on order. Scoring is as before. 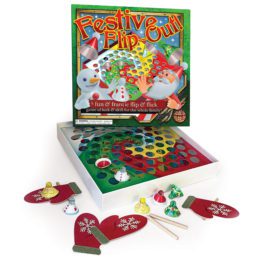 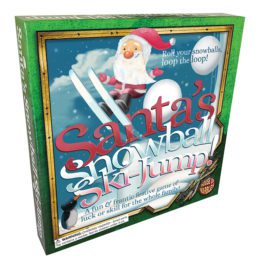 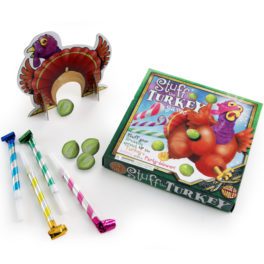