Set up your Humpty’s garden as shown on the felt mat provided.

The aim of the game is to knock Humpty off his wall and into the hole behind him.

Four player’s play with four colours of winks. (The six counters of each colour are known as “winks”) when a wink is flicked by a larger counter known as a “squidger” it should take off at an angle of 30-45 degrees (rather than scooting along the surface or going straight up in the air).

The youngest player starts, then each player takes a turn to flick a wink – with play proceeding clockwise. If a player successfully scores with one of their winks then they get an extra shot. Any wink falling outside Humpty’s garden must be played, at the next turn, from where it lies. If a wink lands so that it covers, or partly covers, another wink, then the lower wink has been captured (“squopped”).

A squopped wink cannot be played until it is released by the upper wink, either by the upper wink playing off it or the upper wink being moved off it by the action of another wink. The player responsible for knocking Humpty off his wall wins the game. If no player achieves this objective before all the winks lie within the garden (or a time limit expires) then the winner is decided by adding up points scored by landing on flowers or in the back hole. 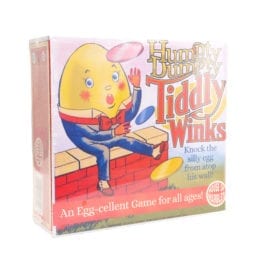