This item is now discontinued

A six pointed star coloured to hole 10 matching playing pieces. Pieces are played on the intersections of the lines. Ten pegs per person, each set a different colour.

Object of the game

To move all 10 pieces into the point of the star directly opposite.

Players decide who goes first, then take turns. The turns pass clockwise around the board, each player moving one piece in a turn. A piece can be moved in any direction, forward or backward, along any line to the next adjacent vacant point. If the adjacent point is occupied (by one of the player’s own pieces or by an opponent’s) and if the hole beyond is vacant, a player may jump over the occupied piece. The jumped piece remains where it is. A player may make multiple leaps in one turn. The first person to get all 10 pieces to the point directly across the board wins. The other players continue until all the players occupy new territory. 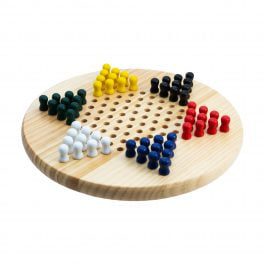