Records show that European boys started jumping rope (or skipping) in the early 17th century. The activity was considered indecent for girls because they might show their ankles. There were no associated chants until the early 18th century when girls began to jump rope. They added the chants, owned the rope, controlled the game, and decided who participated. These chants are unusual inasmuch as they were transmitted from child to child usually without an underlying reason, as opposed to nursery rhymes which were transmitted from adult to child and often contained a moral. We have faithfully recorded ten of the most popular here. They tend to include nonsense or silly words to make children laugh. Unless specified, the aim of each game is to last as long as the chant continues without missing a jump.

My Mother Gave Me a Nickel

(The letter that you miss on is the first initial of your boyfriend or girlfriend. Whereas in other rhymes the aim is to jump as long as possible, in this rhyme the jumper sometimes intentionally miss on the initial of first name of a boy or girl they like.) 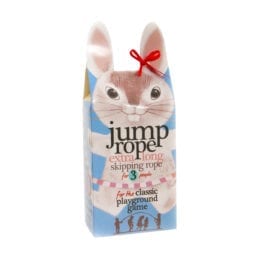