The game is played on four grids, two for each player.  On one grid the player arranges ships and records the shots by the opponent.  On the other grid the player records his/her own shots.

Before play begins, each player secretly arranges their ships on their primary grid.  Each ship occupies a number of consecutive squares on the grid, arranged either horizontally or vertically. The number of squares for each ship is determined by the type of the ship.  The ships cannot overlap (i.e only one ship can occupy any given square in the grid). The types and numbers of ships allowed are the same for each player.

After the ships have been positioned , the game proceeds in a series of rounds.  In each round, each player takes a turn to announce a target square in the opponent’s grid which is to be shot at.  The opponent announces whether or not the square is occupied by a ship, and if  it is a “hit” they mark this on their own primary grid.  The attacking player noted the hit or moss on their own “tracking” grid, in order to build up a picture of the opponent’s fleet.

When all of the squares of a ship have been hit, the ship is sunk, and ship’s owner announces this (e.g. “You sank my battleship!”).  If all of a player’s ships have been sunk, the game is over and their opponent wins.

Luck and clever tactics lead to victory. An entertaining game for 2 persons.

Object of the game:

Sink your opponent’s fleet before they sink yours!

Assemble the battle board:

When laid open and flat with the printed grid uppermost the box becomes the battle board. The cardboard screen must be inserted in the gap in the middle of the board to prevent your opponent from discerning the distribution of your armada. Each player has four vessels to place in their grid horizontally, vertically or diagonally.

Tiles of the same colour must be laid together and each vessel must not cross another or be laid on top of another. 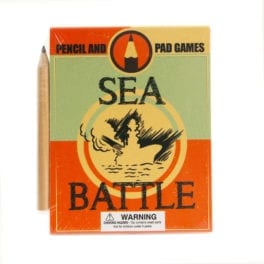