Object of the game

Get your counter to square 100 first!

Lay your counter on square 1 and throw the dice. Move your counter the requisite number of spaces according to the number shown on the uppermost facet of the dice.

The next youngest player takes a turn.

If you land at the bottom of a ladder your counter can climb to the square at the top.

If you land on the head of a snake you must slither down to the square at the tip of its tail.

The first player to reach square 100 wins. You do not need to throw the exact number of spaces left to win i.e. if on square 97 any throw over 3 will win the game.

The aim of the game is to be the first player to reach the end by moving across the board from square 1 to square 100. You will travel the board from base to top, right, then left and so on.

Commence playing. The first player to roll 6 can enter the board. Each subsequent player must also throw a 6 to enter the board. The dice must be rolled again to show the number of squares that the player entering the board may move initially. Place the marker on the appropriate square.

Vintage Snakes and Ladders Board Game 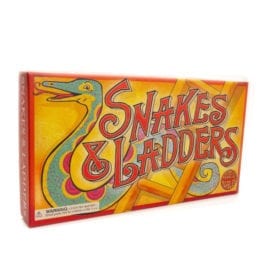 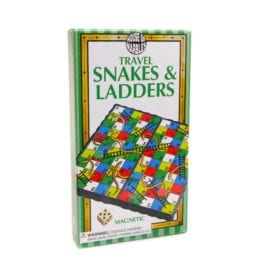