An exciting and educational construction game for all ages.

This game can be played by two or more persons, depending on the number of BEETLES available.

The object of the game

Each player must construct his own BEETLE. The one who achieves this first wins.

The method of play

Take all the parts of the BEETLE and put each in its place on the board.

Before play begins, see that each part is in its place, then each player throws the dice once, and the one who throws highest begins. Each player tries to get the body of the BEETLE first, by throwing a 1 on the dice. If he succeeds he may throw again, in order to try to get the head. The body and head must be won in that order, before any other part of the BEETLE can be added. The legs, eyes, antennae and mouth need not be won in any special order but can be gained after the body and head.

The player loses the dice whenever he fails to throw a number required for a missing part.

The complete BEETLE consists of one body, one head, two eyes, two antennae, one mouth and six legs.

Whenever a player adds a necessary part to his BEETLE, he may throw the dice again to try for another part. 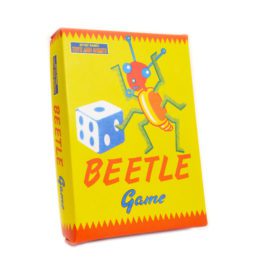