Put the dominoes face down on the table and mix them up.

Each player takes 6 dominoes; for a game with more than 3 players, each player should draw 3 dominoes.

The remaining dominoes are left on the table in a pile for picking. Dont let the other players see your dominoes.

The first player places one of their dominoes (right-side up) on the table.

The second player tries to put a domino on the table that matches one side of whats already there. if the player cannot go, the player picks a domino from the pile and skips that turn.

The chain of played dominoes will develop randomly, and can look a lot like a snake or other shapes.

Continue taking turns putting dominoes on the board (or picking one from the pile if you cannot go) until someone wins. In regular dominos, the best strategy is to get rid of doubles first.

The winner is the first person to get rid of all their dominoes. But if no one can get out, then the person with the fewest dominoes left is the winner. 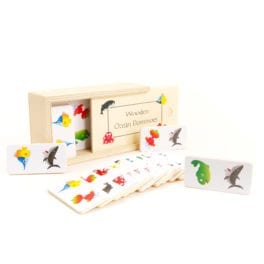